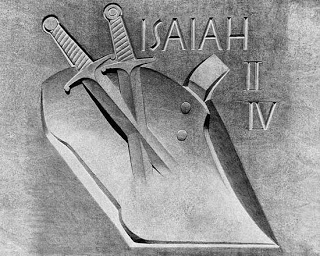 It's time to call an end to Mormons arming themselves to protect against an imaginary tyrannical government or even for "self-defense."

Don't get me wrong. I get the anti-government sentiment. I've worked for the feds for 34 years and don't like them much. But heaven help us if we continue on the path we are on!

There is a sickness in American culture (and I mean the US, not our Canadian or Latin American friends). Actually, there is more than one sickness. One is racism and the original sin of slavery which we have not shed, not nearly as well as other American neighbors who were also under this curse. The other, related sickness is the obsessive love of gun culture.

Doctrine and Covenants 45:65 And with one heart and with one mind, gather up your riches that ye may purchase an inheritance which shall hereafter be appointed unto you.

66 And it shall be called the New Jerusalem, a land of peace, a city of refuge, a place of safety for the saints of the Most High God;

68 And it shall come to pass among the wicked, that every man that will not take his sword against his neighbor must needs flee unto Zion for safety.

69 And there shall be gathered unto it out of every nation under heaven; and it shall be the only people that shall not be at war one with another.

70 And it shall be said among the wicked: Let us not go up to battle against Zion, for the inhabitants of Zion are terrible; wherefore we cannot stand.

71 And it shall come to pass that the righteous shall be gathered out from among all nations, and shall come to Zion, singing with songs of everlasting joy. (emphasis added)

No swords, no arms, the only place of safety to be Zion because we trust in God more than the arm of flesh. We do not war with each other, nor with any people.

We have violated this in Missouri, Mountain Meadows, and in stockpiling arms in these latter-days.

We have also violated this in missing the message of the Book of Mormon. Yes, we can all run through the Pride-Cycle how the Nephites were righteous then blessed of the Lord but took to much pride in their blessings and fell into sin again until they were humbled and then the cycle starts over. But what exactly was that Nephite sin of Pride again? It wasn't just the costly apparel, it was constant warfare against the so-called "evil" Lamanites. Oh, sure, you can get a lot of good arguments for defensive war and analogies of building up all your defenses against evil (usually used strangely for sexual sin). But how again did the ultimate Nephite destruction come about? War and hatred against their designated enemy.

I'm no prophet, but I know some. And I've heard some messages from the current ones that I think are themes that will come back to us soon.

President Nelson cautioning against the tactics of the Malheur armed occupiers:

Elder Nelson, on the eve of war with Iraq cautioning against war and specifically preemptive war:

And President Oaks warning the Saints of Southern Utah to stop stockpiling weapons:


LDS apostle Dallin H. Oaks cautioned Mormons against joining or supporting "right-wing groups who mistakenly apply prophecies about the last days to promote efforts to form paramilitary or other organizations.

"Such groups could "undermine the authority of public officials," Oaks said Sunday at a regional Mormon conference broadcast from the Marriott Center on Brigham Young University’s Provo campus.

I can't recall any similar admonitions from President Eyring, but I get the feeling he is not a gun-nut.

Children of Israel, Lay down your weapons!