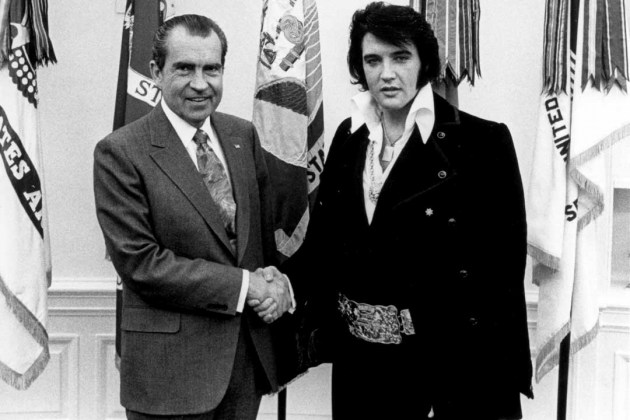 One of the strangest photographs ever of a President of the United States (well, until any photo of the current president over the last three weeks), was this one of Nixon meeting Elvis Presley. Presley presented himself to the President as one concerned about the way the liberal left and drug culture were leading the youth of America astray and away from the patriotic ideals represented by Nixon.

I just watched the Amazon production of Elvis & Nixon, my wife out of town so I could get away with it. I would give it four stars. ****

And the bigger point here is the realization that our current President is the perfect fusion of Nixon and Elvis. All the hypocrisy of both; espousing patriotic ideals while allowing personal demons to self-destruct in front of a national, no, international audience.


If you can't see the irony of Elvis presenting himself to Nixon to assist him in the drug war as a special federal agent or the irony of Nixon in all his glory, then there's nothing I can say to convince you.

Still, pictures are worth words to the tenth power. It is possible if you squint just a little to see a drug-addled superstar (on the right) and a morally compromised politician (on the left).

There are still fans of both. Some blame the media, the liberal left, and drug culture for destroying Nixon just as they blame Elvis's Daddy and the Colonel for destroying Elvis. I'm awfully suspicious that this might be the same demographic that elected trump to the highest political office in the land and as the world's entertainment King.

To close out are some more photos from the National Archive collection that appear to be story frames for the movie.

Both Elvis and Nixon have left the building. Trump remains.