Running the Galisteo River in Search of the Mormon Battalion Route

I finished last night's posting pretty late with the reference to running the Galisteo. When I thought about it this morning, I realized that was sort of an inside joke if only in my subconscious because, well, I wasn't exactly talking about white water adventures. As I started out with my love and respect for the rivers of the Pacific Northwest, the Galisteo isn't like them. I suppose the Santo Domingos appreciate the huge, monstrosity of the Army Corps Engineers Dam, because there have been flash floods that washed away parts of the ancient Pueblo which has been moved based on those floods. And I am sure there may be 500- or thousand-year floods that might actually float a boat. But in my experience, the Galisteo was for trail-running - on foot. Please note that the information for the recreation site above indicates no "water sports" "fishing" or even "drinking water." Remember, this is New Mexico.

Based on my route maps from the Utah Historical Society and the BLM archaeologists, I had a pretty clear idea of the Mormon Battalion Route to San Felipe. Coming down existing NM State Highway 14, also known as the Turquoise Trail (the Cerrillos Hills being the principal ancient and modern source of turquoise for hundreds of miles), you arrive at the town of Cerrillos on the Galisteo River. Just as the Galisteo River isn't much of a river, Cerrillos is more of a movie set than a real town. Now, don't get me wrong, it's a really cool place and the movie sets are genuine. There is a wonderful antique store there as well as an odd little rock shop and petting zoo with an overlook to the Galisteo River (dry wash - not all that scenic - other views of the Galisteo are much better).

The Battalion Route on the old Spanish road turned at the Galisteo River (er, usually dry), and went west past the town of Waldo (a former railroad watering stop and real ghost town with only foundations left - now you know where to find Waldo!). It continued down the Galisteo until just past where the huge Galisteo Dam is holding back a lot of tamarisk but not much (if any) water. Then it turned to the left, or southwest, out of the Galisteo and up over the modern roadway to the dam and a little ridge onto Santo Domingo Reservation lands which it crossed until we met it coming out at State Road  22.

During the period all this trail route searching, we moved from Santa Fe to Albuquerque. I was still determined to organize a commemorative Scout expedition even if in a new Stake of Zion. I started small by taking a group of older Venture Scouts up to the area where the old route turns below the dam and gave them some compass courses to follow to discover some of the remnants of the trail for which I had the key with access to the BLM archaeological report.

The Albuquerque East Stake conducted a commemorative Mormon Battalion Hike every year in the fall. For some reason, they included a ten-mile night hike in the dark, a camp, and then some service project work the next morning. I went on a couple of those down at the Bosque del Apache some hours drive south of Albuquerque on the banks of the Rio Grande. It was an authentic route of the Battalion even if we walked on levee roads that had clearly been built many years after the long march. I let my explorations of the route north of Albuquerque be known to Stake leaders and was then assigned to organize a hike on that route - less than an hour from home.

Wanting it to be as genuine as possible, and on the real route, I needed to do some more exploration having assisted in that transfer of former public lands on the route farther to the west (south and west of State Road 22) to the Santo Domingo Pueblo. With the intent of keeping boys off modern roadways, I wanted to get them on the route where they would have a "wilderness" adventure and still be safe and not easily lost. Wandering that other portion of the trail we had explored after dark, could have been a recipe for disaster. So that's when I ran (on foot) the Galisteo to see if it was a suitable route.

In those days I was a serious runner completing four marathons between 2002 and 2005. I thought I could work a long-run Saturday into my trail exploration. I parked off the dirt road at Waldo and headed into the Galisteo bed. Being aware and responsible concerning land status, I was heading into lands (or dry water courses) withdrawn from the public domain for the Corps of Engineers project. The Corps had no "no trespassing" signs or other restrictions of which I was aware, so I figured the bed itself was free public access. Anyway, I headed out with my water bottle and energy pouches. It was about five miles to the dam so a round trip of ten miles was just fine for a Saturday run. It was beautiful in a stark, New Mexican way. There was a trickle of water which concerned me a little because boys would certainly find that, especially on a night hike. I figured that neither I nor the boys could get lost though, as the river or arroyo bed kept on in the same direction within obvious banks until it hit the dam which simply no one could miss. It worked out great for me even as I had to wander a bit through tamarisk growth closer to the dam where I suppose it does get some water collection at times. That was my only concern, whether there might be a significant rain event that would make travel in the river bed difficult. But it certainly was not on the day I was there.

I called the managers of the dam and the small picnic area to arrange for a special use permit for a small fee to camp a hundred or so boys there. They were very accommodating with our offer of doing a little clean up for the service aspect of the activity. When I presented to the Stake leaders, they were not so excited about sending boys down the arroyo in the dark. I guess there always could have been the risk of a flash flood but I think we would have known well ahead of time based on the current conditions. And I suppose it is always possible to lose a Scout or two even on a one-way dry gulch to a dam that no one (but a Scout) could miss.

So I modified the route a little. We started at San Marcos, went carefully down the shoulder of 14, then through the edge of Cerrillos and down the dirt road to Waldo - about five miles, all on the original route. Then we hiked up the road out of Waldo up the side of La Bajada to end up close to I-25. Then when we were sure we had all our boys, we ferried them by car to the Galisteo Dam picnic area where we camped. It worked. And we slept there right on the trail even if on a monstrous pile of rocks to hold back whatever the Galisteo could possibly threaten. I felt good that night.

As I fulfilled my explorations and Scout adventures, I note that the people of the United States now recognize that old Spanish Trail by force of law. Just after I moved from Santa Fe to Albuquerque, the Congress passed "An Act to Amend the National Trails Systems Act to designate El Camino Real de Tierra Adentro as a National Historic Trail," Pub. L. 106-307, 114 Stat. 1074 (October 13, 2000). It even has its own, official, government logo! And a pretty cool one at that: 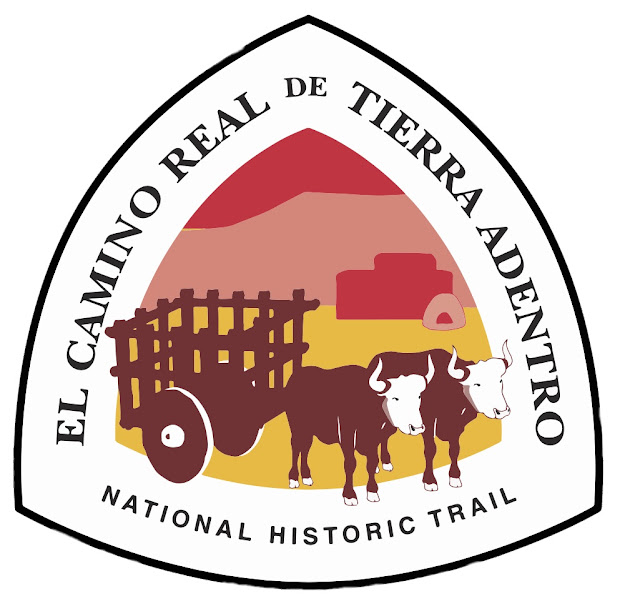 I didn't even work on that legislation. Yet I feel very much a part of that trail.
at 11:04 PM