"The Ancient Yew" or "Otzi, We Barely Yew Thee"

Many people come to the yew tree with preconceived notions. Modern-day Druids want to believe the yews in British churchyards are from pre-Christian origins as they "return" to the ancient practices that were mostly made up by the Romans in their anti-Celt cultural wars. The author of the yew book* before last tried to convince the reader and perhaps himself that the British yews were all planted in churchyards by the Normans, or maybe the Saxons at a stretch.

My latest dive into yew lore is The Ancient Yew: A History of Taxus Baccata, by Robert Bevan-Jones (Oxbow Books, Oxford 2017). The author is amazing in his comprehensive assembly of the evidence. I think it is all there as well as can be gathered. There are extensive, footnoted sources. However, the writing style is a bit jumpy as is the presentation of the evidence. Bevan-Jones is strongest in his theme that the churchyard yews are "at least" 1500 years old which places them right at the time of the establishment of Christianity in Britain by the Celtic Saints. He first discusses the botanical challenges of the strange growth patterns of the tree and then presents the best estimates by charts and graphs to support his Celtic-Saint-planting theory.

But then came the Iceman. In the final chapter, "Yew: an Archaeological Perspective" (which perhaps should have come earlier at least in a chronological sense):

Prehistoric yew bows have also been found in Switzerland, Austria and Germany. The 'Iceman' found preserved by a glacier near the Austro-Italian border in 1991, had preserved with him a fine unfinished yew bow. His possessions included a copper-headed axe, complete with an unusual yew wood 'knee-joint' shaft, utilising the natural joint where branch meets trunk. (p. 140, footnote omitted).

Wait a minute! Besides the slightly awkward writing style, that's Otzi the Iceman! While the reminder that Otzi had yew implements is great, why not reference him by his popular name now that the book is in its 2017 third edition? Otzi's yew bow and ax handle have little bearing on the age of yews in British churchyards. And the last chapter is fascinating in the strange finds and apparent uses of yew wood among our ancient ancestors. Some of the archaeological evidence even points to religious practices including tree-of-life legends and prehistoric yew gods. Yet the mass of facts and uneven presentation seem to distract us from a good story.

For my part, I first came to the yew in a lot of mystic mystery. There is no shame in my fascination with my own "roots." Cusop Churchyard remains the home of my traceable ancestors as well as some impressive, ancient yews. The Cusop yews feature in the book as well as a yew in the churchyard at St. Faith's, Llanfoist on the Usk River across from Abergavenny. The Llanfoist yew does not appear to be as old as the ones at Cusop, but we still have family buried there and a restored headstone for John Vaughan (1789-1851).

It got even better. In the middle of discussing the history of the Celtic Saints and their sacred wells, the author takes a side path to an early literary reference to the Yew. The Mabinogion is a medieval collection of Welsh legends. The stories are wonderfully exotic yet place themselves in real places that can be identified today. The earliest known writing about King Arthur is in the story of  Culwch and Owain which scholars trace to the tenth century in written form and maintain that it came from oral tradition that could go centuries farther back. A place name in that story is "Ystrad Yw," the "strath," "valley," or "estate" of the yew. The author cites a source linking this to the confluence of the Rhiangoll and the Usk Rivers and a small, nearby tributary to the Rhiangoll called "Ewyn Brook" with etymological connections to "yew" in Welsh. 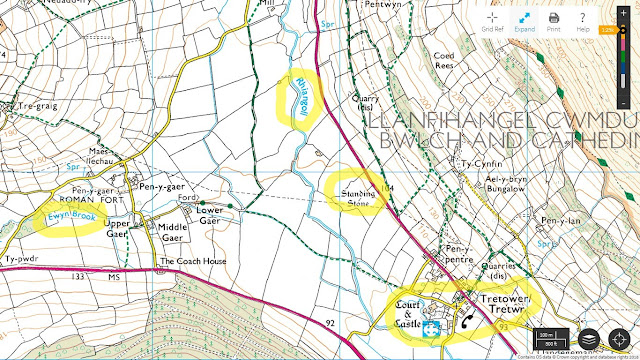 What a torture it is to read about a place one knows fairly well but not nearly well enough. This little valley is connected to the medieval Vaughans of Tretower Court and a few generations farther back to dark-ages origins in Cwmdu or the black valley of the Rhiangoll. The highlights on the map above show three circles on the right of the places I know and the circle to the left, the Ewyn Brook next to the Roman Fort. Standing Stones, Romans, King Arthur, Ancestral Castles, and the Yew Tree. it doesn't get any better!

The most helpful part of this book may be the chapter on botany. It dispels a few myths. While the yew wood, needles, and seeds are poisonous, it is not easy to actually cause death. A lot has to be eaten, maybe brewed in a tea. The red berries are healthy and the seeds cause no harm as long as they are not crushed. And death by yew poisoning takes a while with unpleasant symptoms such as vomiting, retching, and extreme abdominal pain. So there are warning signs.

The yew has been used in a purification sense both biological and spiritual. They often grow in protection of sacred wells and the needles in cold water pose no health risk. In fact, the acidity of the needles tends to dispel bad smells and bacteria purifying water and sterilizing the ground in graveyards. The practical aspects may have led to the ideas of protection from evil spirits beyond bad humors. And extracts from the yew have been developed as a cancer treatment now made synthetically.

The author also confirms the use of the yew branches in Palm Sunday worship. And back to the poison, deer seem to thrive on the branches but domestic livestock not so much. Smart farmers trim yew branches out of the reach of livestock and churchyards are generally walled so sheep and cattle do not enter.

In the archaeological section, yew has been used for weapons as with Otzi, for thousands of years back to the time of mastodon hunters. And pipes made of yew have been found in peat bogs that may have been the earliest bagpipes. Hauntingly strange are human figures carved of yew that have no apparent meaning. They have to be more than neolithic toys or dolls, but exactly what eludes us. (I may be jumping around a bit here as does the book.) Here's a link to the Hull Museum for more "details."

I will tentatively accept Bevan-Jones's cautious dating of at least 1500 years of age for churchyard yews but that begs the question, what if they were older? Did Christianity start earlier in Britain? Or where Christian churches and monks' cells established on sites of previous religious observance relating to the yew?

There is a lot of information in this book. It still requires some effort to massage. And ultimate answers remain elusive.