Edinburgh fascinated me on my first visit before I knew I was destined to be a tour consultant. Navigating the Escheresque street levels of the old city was playing three three-dimensional chess. Even digital Google maps couldn't straighten that out. And monuments to Sir Walter Scott were everywhere! No wonder the Scottish Nation loves him as reality superseded fiction when he was the one who found the crown jewels of Scotland hidden in a chest deep in the dungeons of Edinburgh Castle! 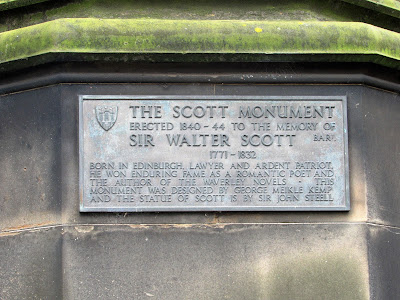 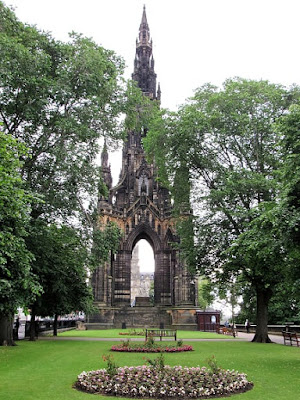 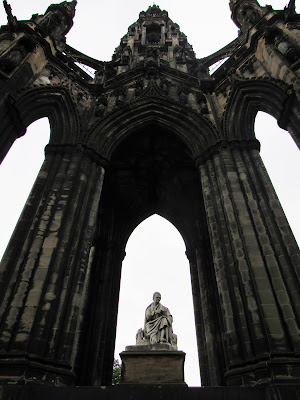 More confident in my Welsh experiences, I have much to learn about Scotland. (And I'm still learning all I can about Wales!) I thought it necessary to do a bit of literary study of the great Sir Walter having only read Ivanhoe, when I was much younger and more prone to adolescent dreams of knights and fair damsels offering only unrequited love. Ivanhoe isn't much about Scotland either.

So I took it upon me to read the the Waverley Novels. Waverley was first thinking that would be enough or at least encompassed the Waverley oeuvre. But, no, all the Scott novels are supposedly in the canon. I next read Rob Roy thinking that will do it covering both the 1745 and 1715 Jacobite Risings. Scott is still an entertaining read, but he's no timeless Dickens. It is interesting that Scott was writing two hundred years ago and it's now over three hundred years since the rising of 1715!

Our great American novelist, Samuel Clemens, was probably correct in blaming our Civil War on Sir Walter Scott. Scott's novels are full not just of damsels and their unrequited love, but there is no greater a noble "lost cause" than that of the Jacobites with a series of uncivil wars in failing attempts to restore a Stuart to the throne of Great Britain. Still, Catholic Britain seems a tamer "lost cause" than the enslavement of a designated race of human beings.

Some say that Scott's novels of the Highlands created Victorian tourism and even the love of all things Scottish by the British royal family, Germans they may be. It was Sir Walter who convinced the Hanoverian George IV to don Highland regalia for a trip to Scotland right down to the pink tights so as not to show any royal leg flesh. The painting is said to be "flattering" as the fourth George was rather corpulent. So be grateful you were not his dressing servant.

The irony of the fourth George falling in love with Scotland was that the whole point of the often occurring Jacobite Risings was because the German Georges were the eventual Protestant answer to the abdication of the Catholic James II (or James VII of Scotland) in the Glorious Revolution ("Glorious" as long as you were a Protestant.) "Jacobus" being "James" in Latin, which ancient language royals still liked to use in official documents and coats of arms, became the origin of the term "Jacobite." (Even if the Latin alphabet had no "J" so they had to use an "I." Languages are weird.)

Back to the novels. Waverley was much more the annoying of the two as the beautiful Highland heroine only offered her unrequited love as all her true love was dedicated to restoring a Stuart to the throne. Thus, she ended up in a French nunnery. But Waverley gave a good feel for the army of the Bonnie Prince Charley moving south into England with the Bonnie Prince such a great guy but basically clueless.

Waverley was more about Edinburgh while Rob Roy was more about Glasgow. Having now visited both cities, I find them fascinating in their different ways. Edinburgh with its old and new cities (train station in the middle), and Glasgow on the tidal Clyde with its ancient Cathedral Kirk of St. Mungo's. There's a lot of dark stone in both cities. Edinburgh's Georgian new town is very classy as are parts of Glasgow, especially around the University with its green fields and gardens (and where a sword fight occurs in Rob Roy).

I shouldn't give spoilers for Rob Roy, but, sigh, it is a bit more romantic in a feminine charm sort of way even if the more bloody and horrifying, particularly in the strong feminine character, that of Helen MacGregor, the wife of the historical Rob Roy, who I hope fictionally orders the spy Morris thrown from a cliff into the loch with a stone tied around his neck! (See, artistic representation above.) That is one lassie you would not want to mess with!

In Scott's creation of the historical novel genre, he does a great job of weaving fictional characters into real events and mixing in the persons of historical significance. He did an amazing job of presenting a loyalist, even English sentiment, while having great sympathy and connection to the losing Jacobite characters. And his romantic descriptions of the Highlands would make anybody a wannabe clan member or at least a tourist.

One of the best things about reading Scott is that much like our own Samuel Clemens, or Mark Twain, he made great use of the native vernacular. Scotland had three languages in those days: English was for the educated city folk and loyalists to the British Crown; "Scot" was a dialect of English supposedly splitting off of Middle English (think Chaucer) and used in the Lowlands and by the Highlanders when they had to come down to the Lowlands (think Groundskeeper Willie); and Gaelic, pronounced "GAL-lick," not "GAY-lick," was used by the mysterious and romanticized Highlanders. I was pleased to see a Gaelic oath indicating that "Diaoul" is as good a swear word as "Diawl" in Cymraeg, and apparently meaning the same thing. (It's what I use when the neighbors' dog starts barking at me through the fence.)

Aye, we canna lie, but trow ken that mae wee bonnie bonnet is off to ye, Sir Walter, the Scot!
at 9:35 PM