Y-DNA Results Are In!

And, my fathers' fathers do appear to be Welsh. Remember, Y-DNA only traces the direct, male line. 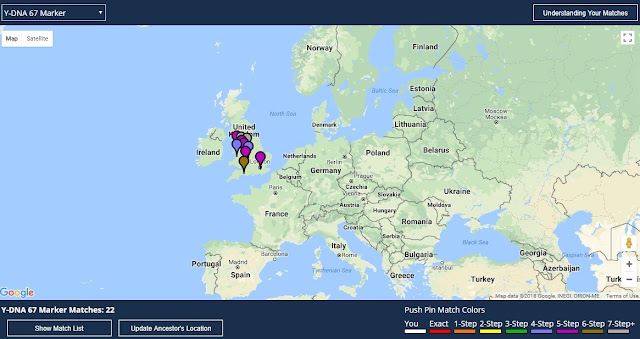 Which brings us to the next problem. . . .
There simply is not enough data in this Y-DNA base. Oh, I've got hundreds of exact matches on my main strand making me Western European of a Celtic bent. But on my chart of closest matches, there is one Vaughan, probably a coincidence, and no Price, Rice, Rees, ap Rees to match our circumstantial evidence of Rees Price being the "tailor" father of illegitimate John Vaughan, born 1789.


There are 17 Davis or Davies names out of out of 58 total. The second most frequent is Wynn or Wynne at a total of 6. Both good Welsh names. But Davies is a likely culprit for fathering John Vaughan.

We simply do not have enough Welshmen tested. Maybe I can talk some into it on my next trip over. I'll ask all the Davies I meet.

We're not without hints. Wynn is not a common name in our corner of Wales. Davies most certainly is. And, there is a Davies who was a tailor in Hay in Pigot's 1830 Directory. He is too young, but it could have been his father or an uncle. So far in my quick search, I've come up with the following possibilities.

From Llanstephan Parish Bastardy Papers, Powys Records Office R/EP/41/0/BB/11 [Llanstephan is a parish across the Wye from Glasbury. Of course I have no idea who this Elizabeth Vaughan was].