And yet, it is pretty blue! And very pretty at that.

My body is pretty well oxygenated as I have been taking a lot of deep breaths since the election was called yesterday morning by the Associated Press recognized as the impartial leader of the constitutionally protected Free Press in the United States. It appears to be a solid win with some votes still to be counted in the tight races of Georgia, Arizona, Pennsylvania, etc. Votes are certified by each state and the electors convene in December to make it official. In American tradition when the outcome is clear, the losing candidate offers a graceful concession to the winner. That will not happen this election.

It remains to be seen how blue the Senate will be until after two run-off elections in Georgia later this year. They are in newly blue Georgia so don't count out the Democrats yet.

But even if there is a Republican Senate led by the Obstructionist-in-Chief McConnell, there is so much good that will happen and so much bad that will not in the next four years. The President will not be constantly tweeting outrageous lies and insults. No matter how evil and corrupt you believe the Biden Family to be (and I don't think they're too bad) it will be nothing like the horrible example of moral turpitude we have had these last four years. I have yet to understand why so many millions voted for him. I know some say it's not for him but the conservative "policies" but still....

Last night we watched the victory speech of the President-Elect:

My son who recently got a job at the NASA Research Center in Langley, Virginia is here in Utah working remotely due to Covid and because his wife is finishing her student teaching here. He offered to help put up our Christmas lights yesterday morning. After hearing President-Elect Biden's speech last night, we kept the Christmas lights on all night. 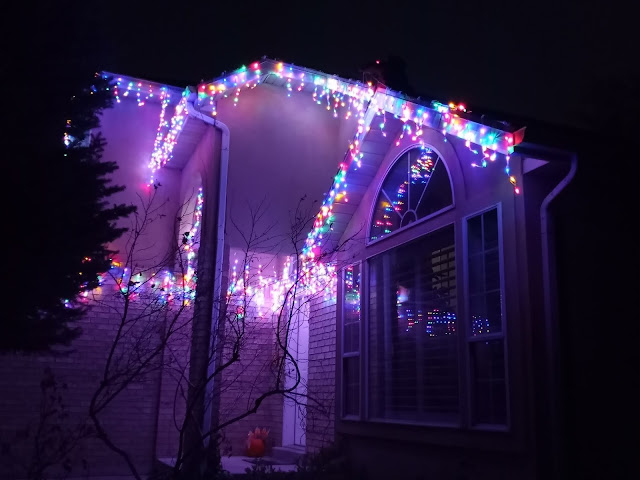