More DNA Analysis - The Celtic Will Out

Yes, you can download and upload the raw DNA data from ancestry and use on other sites. The easiest appears to be gedmatch.com, a "crowd-sourcing" site that needs our financial along with DNA contributions. It's all still very confusing and I still haven't figured out how to look at my Y Chromosome which I seriously need for Welsh connections.

But I found my American Indian percentage! Or at least one of the versions. There are several ways to look at DNA on the Gedwatch site. It scares me to begin to understand them cuz of a little knowledge and stranger-danger, etc. One of the analyses gave me:

With my basic math skills, I can figure that five times that makes just over a full one percent and a hundred times that is about 500. So, if I go back to the generation where I have about 500 ancestors, that's nine generations back. That would make my Native American ancestor a 7th-Great-Grandparent. Peninah is my 3rd-Great-Grandmother. And four generations back from her would be her 2nd-Great-Grandparents. I dunno. I'm working on some shaky Science or Math here. Maybe this .22% is not a percentage of my total ancestral make-up but just a sliver of genes indicating some American Indian ancestry? It probably is less than one percent.

Then I was off to find my Welshness as a Cymro. Some website told me that the K12 admixture was the way to look for British ancestry. I finally found good Celtic and Welsh percentages on a MDLP K=12 Admixture project. (Whatever that is). 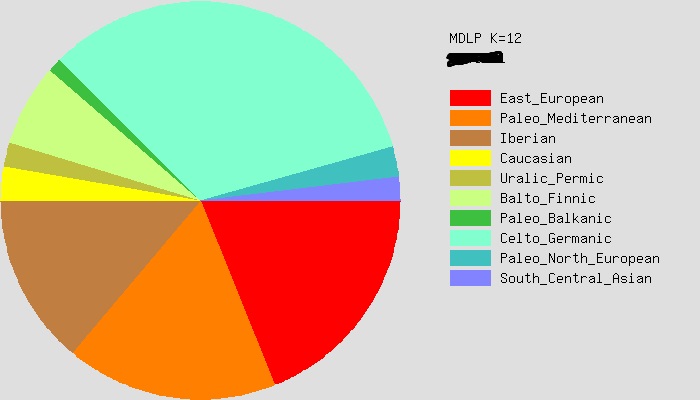 
The next are clearly not percentages, but Single Population Sharing: [whatever]


In Highlights are my apparent Celtic links. Cornish = Welsh. Argyle is an interesting one as well and a very high number. Argyll is another name for the Dark Ages Kingdom of Dal Riata in southwestern Scotland, Romano-British Celts who fought the Saxon onslaught. My Portuguese-Iberian is very interesting as it's another area of Celtism, at least in passing through with pockets remaining. Some of the other "Admix" systems were showing some Basque as well, the mystery people of Iberia with non-Indo-European language roots.  Best of all are the showing of Paleo-North-European. YEAH, we built Stonehenge!

Well, there's more work to do but also the other aspects of my life I still have to deal with.

What I really need is to figure out my 'Y' Chromosome because all the little statistical tricks I've been finding seem to be dealing only with the first 22. I've got to do my surname trace be it Vaughan or Price.
at 9:12 PM