Not happy for all

In spite of Elinor Jenkins Vaughan’s baptism on December 17, 1841, recorded in the journal John Needham, missionary in the Garway Conference 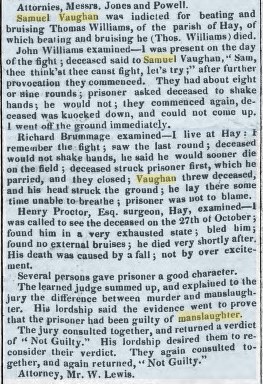 My people came from the very edge of the Welsh industrialized area. Beautiful green mountains and hills transformed into deadly industrialized wastes of coal and iron production.

Back in the Welsh-English Border country at Hay, now gentrified as Hay-on-Wye.

Dulas Brook in Cusop Dingle provided enough power to construct mills. There was a paper mill and woolen mills there and in Hay. I had no idea what a woolen mill did besides powering looms, but apparently it could also power the pounding of wool into felt. They also spun wool, hence the "spinsters." There was the related business at Glasbury in the warehousing and sorting of wool to serve the mills in Hay and Glasbury.

The Welsh word for a fulling mill is pandy, which appears in many place-names. And that’s good for my tithing map project with the national Library of Wales. Fulling involves two processes, scouring and milling (thickening). Originally, fulling was carried out by pounding the woolen cloth with the fuller's feet, or hands, or a club. From the medieval period, however, fulling was often carried out in a water mill.

These processes are followed by stretching the cloth on great frames known as tenters, to which it is attached by tenterhooks.  to be held in suspense. The area where the tenters were erected was known as a tenterground.

By the medieval period, fuller's earth had been introduced for use in the process in the place of saved human fluid waste (ammonia). This is a soft clay-like material occurring naturally as an impure hydrous aluminium silicate. It was used in conjunction with wash. More recently, soap has been used.

The second function of fulling was to thicken cloth by matting the fibers together to give it strength and increase waterproofing (felting). This was vital in the case of woollens, made from carding wool, but not for worsted materials made from combing wool. After this stage, water was used to rinse out the foul-smelling liquor used during cleansing.

Felting of wool occurs upon hammering or other mechanical agitation because the microscopic barbs on the surface of wool fibers hook together, somewhat like Velcro.
From the medieval period, the fulling of cloth often was undertaken in a water mill, known as a fulling mill, a walk mill, or a tuck mill. In these, the cloth was beaten with wooden hammers, known as fulling stocks or fulling hammers. Fulling stocks were of two kinds, falling stocks (operating vertically) that were used only for scouring, and driving or hanging stocks. In both cases the machinery was operated by cams on the shaft of a waterwheel or on a tappet wheel, which lifted the hammer.

Driving stocks were pivotted so that the foot (the head of the hammer) struck the cloth almost horizontally. The stock had a tub holding the liquor and cloth. This was somewhat rounded on the side away from the hammer, so that the cloth gradually turned, ensuring that all parts of it were milled evenly. However, the cloth was taken out about every two hours to undo plaits and wrinkles. The 'foot' was approximately triangular in shape, with notches to assist the turning of the cloth.

'wet puddling', also known as 'boiling' or 'pig boiling'. This was invented by a puddler named Joseph Hall at Tipton. He began adding scrap iron to the charge. Later he tried adding iron scale (in effect, rust). The result was spectacular in that the furnace boiled violently. This was a chemical reaction between the oxidised iron in the scale and the carbon dissolved in the pig iron. To his surprise, the resultant puddle ball produced good iron.

One big problem with puddling was that almost 50% of the iron was drawn off with the slag because sand was used for the bed. Hall substituted roasted tap cinder for the bed, which cut this waste to 8%, declining to 5% by the end of the century.

"After melting down the pig-iron as quickly as possible, which took me thirty minutes, there was a pause in which I had time to wipe the back of my hand on the dryest part of my clothing (if any spot was still dry) and with my sweat cap wipe the sweat and soot out of my eyes.

For the next seven minutes I "thickened the heat up" by adding iron oxide to the bath. This was in the form of roll scale.

The furnace continued in full blast till that was melted. The liquid metal in the hearth is called slag. The iron oxide is put in it to make it more basic for the chemical reaction that is to take place.

Adding the roll scale had cooled the charge, and it was thick like hoecake batter. I now thoroughly mixed it with a rabble which is like a long iron hoe.For twenty-five minutes while the boil goes on I stir it constantly with my long iron rabble. A cook stirring gravy to keep it from scorching in the skillet is done in two minutes and backs off blinking, sweating and choking, having finished the hardest job of getting dinner. But my hardest job lasts not two minutes but the better part of half an hour.

My spoon weighs twenty-five pounds, my porridge is pasty iron, and the heat of my kitchen is so great that if my body was not hardened to it, the ordeal would drop me in my tracks.

Fuller's soap and a refiner's fire

Moroni to Joseph Smith
37 For behold, the day cometh that shall burn as an oven, and all the proud, yea, and all that do wickedly shall burn as stubble; for they that come shall burn them, saith the Lord of Hosts, that it shall leave them neither root nor branch.

38 And again, he quoted the fifth verse thus: Behold, I will reveal unto you the Priesthood, by the hand of Elijah the prophet, before the coming of the great and dreadful day of the Lord.

Miracle of the Atonement. The Temple and Sealing power. The Power from on High that comes to all in the Temple as a gift from God.

24 Behold, the great day of the Lord is at hand; and who can abide the day of his coming, and who can stand when he appeareth? For he is like a refiner’s fire, and like fuller’s soap; and he shall sit as a refiner and purifier of silver, and he shall purify the sons of Levi, and purge them as gold and silver, that they may offer unto the Lord an offering in righteousness. Let us, therefore, as a church and a people, and as Latter-day Saints, offer unto the Lord an offering in righteousness; and let us present in his holy temple, when it is finished, a book containing the records of our dead, which shall be worthy of all acceptation.

“This “book” will be prepared using the records of names and  ordinances in the Church’s FamilyTree database.

I am checking and adding records to this database because I want the names of all those I love to be in the book. Don’t you?

Like partaking of the sacrament, attending meetings, reading the scriptures, and saying personal prayers, doing family history and temple work should be a regular part of our personal worship. The response of our youth and others to prophetic invitations has been inspiring and proves this work can and should be done by all members at any age.”