Albert E. Bowen is not one of the big names in LDS Church leadership. He was a serious-minded, hard-working man. He appears to be best remembered and quoted in LDS General Conference for his teachings on Self-Reliance and the Church Welfare Program. He wrote a booklet entitled "Constancy Amid Change" that was updated in the 1980s as well as authoring a Sunday School course of study, "The Church Welfare Plan."

One of the more recent General Conference quotes attributed to Elder Bowen was in an address by Elder J. Thomas Fyans in 1982:


The only way the Church can stand independent is for its members to stand independent, for the Church IS its members. It is not possible to conceive of an independent Church made up of dependent members—members who are under the inescapable obligation of dependency. The Lord must want and intend that His people shall be free of constraint whether enforceable or only arising out of the bindings of conscience. It is not believed that any person or people can live from gratuities—rely upon them for means of subsistence and remain wholly free in thought, motive and action. History seems to record no such instance. That is why the Church is concerned that its members, who have physical and mental capacity to do so, shall render service commensurate with their capacities for aid extended. That is why the Church is not satisfied with any system which leaves able people permanently dependent, and insists, on the contrary, that the true function and office of giving is to help people into a position where they can help themselves and thus be free.

Elder Bowen knew a lot about self-reliance. Born on a farm near Samaria, Idaho, he worked hard in his youth. He spent a harsh winter with a brother homesteading a parcel of land in Star Valley, Wyoming. His mother, Annie Shackelton Bowen (1840-1929) shared her love of books and learning and Albert did well in school, served a mission in Switzerland and Germany, and studied law at the University of Chicago. He excelled in the practice of law and business in Cache Valley and Salt Lake City, Utah. He was called to be an Apostle by President Heber J. Grant in 1937.

What interests me is that his father was David Bowen (1837-1910), born in Blaenavon, Monmouthshire, Wales. He traveled to Utah in the Ellsworth Handcart Company in 1856 along with my 4th Great Grandmother, Eleanor Jenkins Vaughan (1789-1861). The Bowens and Vaughans must have known each other.


The Bowens appear to have been a well-organized family even back in Wales as his father Lewis Bowen (1815-1894) prepared to send David to Utah ahead of the rest of the family paying for much of his passage with the Perpetual Emigration Fund. He traveled on the Enoch Train along with Grandma Eleanor. David gave Abersychan as his address, the same as Elinor, and he listed his occupation as "puddler," the same as some of Eleanor's sons.

The rest of the Bowen Family followed in 1863 with passage on the Mormon chartered ship, the Cynosure.

The 1861 Census, with David already in Utah, shows the rest of his family residing in Trevethin in the Parish of Abersychan, Wales.

The home no longer appears to be in existence. However, modern Google Maps shows an alleyway that led up to "Club Row" where the Bowens lived:

Interestingly, the 1851 Census finds David with the family, but in Scotland! You'll have to trust me on this because the Scots do not so easily share the images of their census online. And it was them because the 1861 Wales Census shows that one of their sons was born in Scotland. The indexing for the Bowen Family in 1851 indicates that they resided at "84 Square" in Dundyvan, Old Monkshire, Lanarkshire. This is the outskirts of Glasgow which was the industrial area of Scotland. David's father Lewis is listed with the interesting occupation of "maleable iron maker." This is a form of "puddling" to produce iron that can be reheated and formed.

"Square" appears to refer to the employee housing called "English Square" at the Dundyvan iron works. Perhaps the Scots thought of all non-Scots as "English." 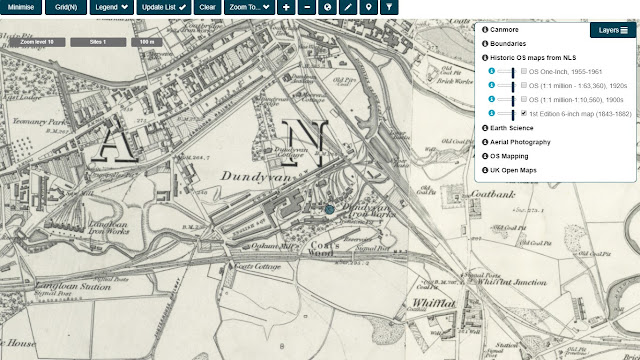 The same area can be found on a modern map: 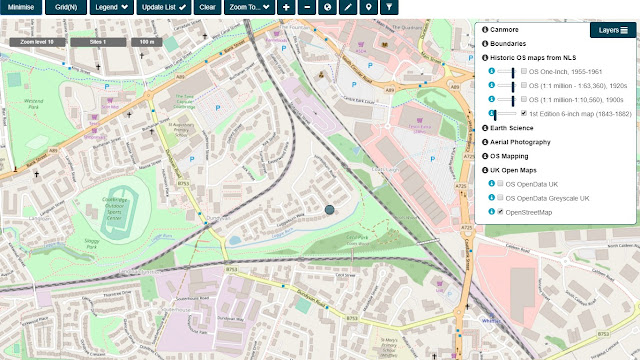 The location of English Square now appears to be a nice, suburban, residential area:

So far, I have not been able to find any explanation of what Lewis Bowen from Wales was doing in Scotland. Perhaps he was needed there for some special skill or process in forging the malleable iron. Perhaps that is simply where the work opportunities were at the time. The family only stayed in Scotland a few years returning to the slopes of the Blorenge Mountain in Wales.

Lewis Bowen had been born on the side of that mountain at Llanover, still a much more peaceful, rural setting.

Farther up the slopes of the Blorenge, Blaenavon is now a World Heritage site today commemorating the progress and human agony of the Industrial Revolution.

One wonders how the family would have fared had they remained in Wales or Scotland.
at 9:14 PM