The Chilean Author, Mario Vargas Llosa, has given an appropriate name to the presumptive presidential candidate of the Republican Party. He calls Trump a "Payaso." That means "clown." If only it weren't so true.

Now the Republican elite are slowly coming to accept this clown in an attempt to unify their party. This week, the President Pro Temp of the Senate, and our own Senior Senator from Utah, Orrin Hatch, declared he was for the clown and expects him to shape up as the election draws closer. Speaker of the House, Paul Ryan, issued a statement after meeting with Trump that they are payasos amigos.

And Trump has moderated his speech somewhat. He said he was only making suggestions when he made some of his more outrageous statements like banning all Muslims from entering the U.S. Maybe that applies to his Great Wall with Mexico to keep out all the rapists too. I don't really know when the Payaso is expressing presidential policy or just making suggestions as part of his payaso act.

Trump has also stepped into a mess by declaring he will not release his tax returns. And he might just be able to bluff his way through it if he hadn't been so hard on Romney about releasing his tax returns which Romney eventually did, in part. (It wasn't the seven-year history like the precedent his father, George Romney, set in 1968). We keep waiting for Trump to go one outrage too far. Maybe this is it but I'm not holding my breath.

The most interesting news is that the most reliable polling data aggregator, Sam Wang, of Princeton Election Consortium, has a map showing that states of the deep South and even Utah (!) could be in play in November. I believe the Utah thing because the Romney conflict seems unlikely to be resolved and that will at least seriously deflate the Republican vote here.

Hillary needs to work on getting her positives up. And while were at it, look at what the Republican Party mess has done for President Obama's favorables (also from PEC): 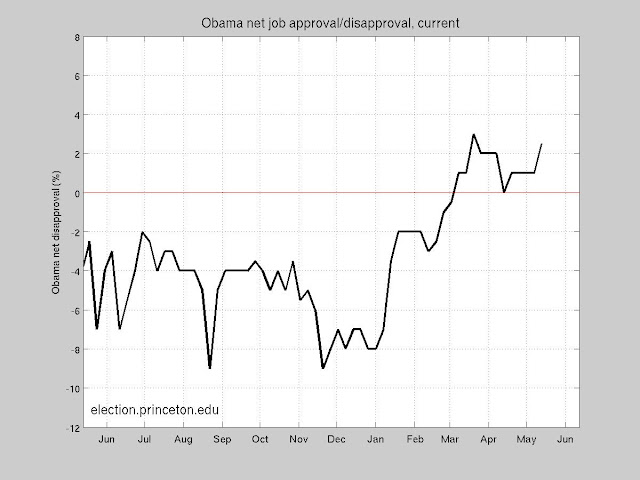 Looks like the Republican Plan to destroy the legacy of President Obama is failing. And for that we can thank Trump and the other payasos he handily defeated in their very bizarre Primary Season.
at 7:17 AM